There is a broad consensus among the scientific community that ocean-borne radiation from the Fukushima nuclear reactor does not pose a significant risk to humans in British Columbia, relative to other environmental risks. Recent (2016) and on-going studies by Dr. Jay Cullen of UVic posted on his project site InFORM and reports from similar WHOI studies along the west coast of the U.S. indicate the amount of tracable material reaching North America is small. Nevertheless, many people are concerned about what they have heard from various other sources. 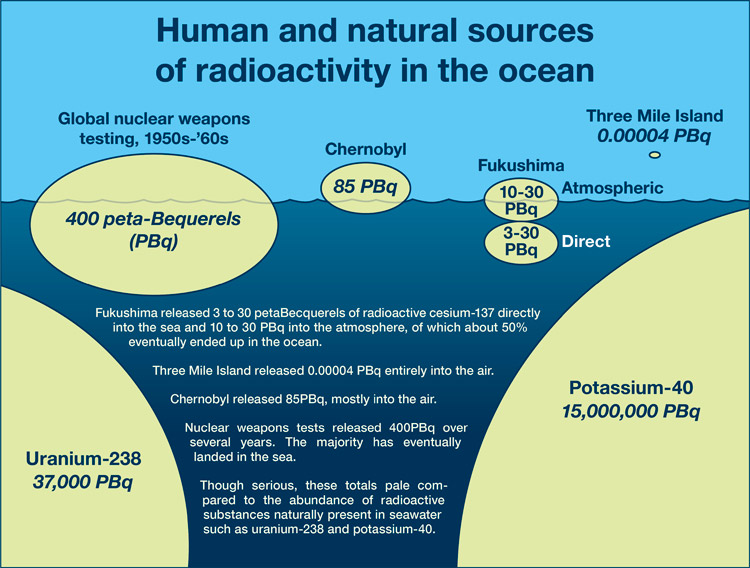 Here we quote from the Comment piece published in the Victoria Times-Colonist on 20 March 2014 written by Patsy Thompson, Director-General, Environmental and Radiation Protection and Assessment Branch of the Canadian Nuclear Safety Commission (emphasis added):

“Based on the monitoring of fish and seafood that has taken place since the Fukushima accident, it is very unlikely that someone in North America would consume local seafood that contains either [Cesium as] Cs-134 or Cs-137. In 2011 and 2012, the Canadian Food Inspection Agency tested domestic fish from B.C. for radioactivity. Neither Cs-134 nor Cs-137 was detected in any of the 32 fish samples.

The Canadian Albacore Tuna Association has also tested B.C. tuna samples collected between 2010 and 2012 and detected no cesium. In August 2011, levels that were roughly 300 times lower than levels that would prompt further U.S. Food and Drug Administration investigation were detected in Pacific Bluefin tuna caught off the coast of California.

The USFDA states that it has no evidence that radionuclides from the Fukushima incident are present in the U.S. food supply at levels that would pose a public health concern. Consequently, seafood caught off the Canadian West Coast does not represent a potential health risk to consumers.”

“ ……No one disputes the fact that radionuclides from Fukushima have crossed the Pacific Ocean. Any radionuclide from Fukushima is so diluted by the time that it reaches the West Coast that there is no need for Canadians to worry about human health effects. To imply otherwise is simply irresponsible.”