Our fall 2011 installation and maintenance expedition sailed September 10 – 30 aboard the R/V Thompson. It was a very active time for 7 Ocean Networks Canada staffers, 4 contractors, 1 Pacific Geosciences Centre technician, 1 volunteer, an 8-man ROPOS crew, 2 marine techs and the 21 crew members of the R/V Thompson. During our 20 days at sea, we completed 13 ROPOS dives at three locations, including a trip into Bamfield for parts.

During our adventures, we deployed 32 new instruments, including those attached to a Regional Circulation Mooring, retrieved-refurbished-redeployed 3 instruments, in particular our Barkley Benthic Pod 3. We also and retrieved sediment samples from Barkley Canyon and took water samples at Endeavour.

Weather significantly impacted expedition operations. We were delayed by strong winds and high seas for 7 days (see our blog), including stormy weather which forced us into Trevor Channel for several hours. In particular, rough seas caused long delays to installations at our Endeavour site.

This did not dampen our spirits; ROPOS crewman Robert Bowen created a t-shirt design which embraced many of the challenges we faced during our time at sea.

Despite the weather, 12 of 21 expedition objectives were accomplished, including some risky and highly successful operations:

NEPTUNE Canada offers an enthusiastic thank you to the crews of ROPOS and the R/V Thompson as well as the able hands of our contractors and support staff. This expedition could not have been accomplished without your help!

We experienced a bit of a delay leaving port at Esquimalt because the crane on the Thomas G Thompson. malfunctioned, holding us up for several hours (see our mobilisation blog post). We transited to our Cascadia Basin site where we recovered the piezometer cable, which we refurbished and redeployed. We planned to lower our bottom pressure recorder (BPR) using a cable with an acoustic release. Unfortunately, the release malfunctioned and we had to bring the BPR back on deck and abort the deployment. We transited to Endeavour.

We successfully deployed the northwest Endeavour Mooring cable and began to survey our cable route for Mothra at Main Endeavour vent Field (MEF), but limited this dive time in order to prepare for our highly complex mooring deployment, which occurred successfully on September 13 (see our blog). This was especially exciting as we had never deployed a mooring with only one ship and this operation went off without a hitch! 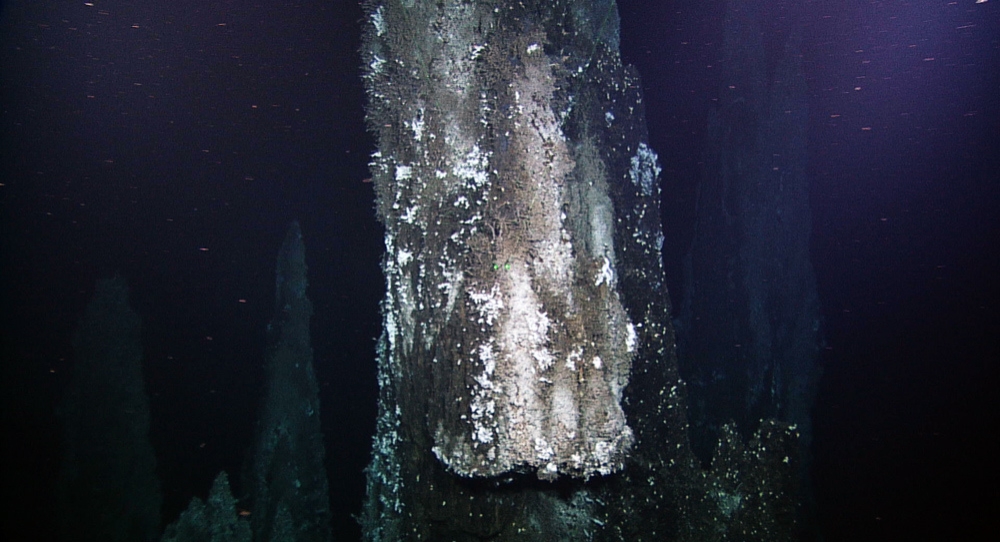 Although weather and some small technical problems complicated our dives a bit, we did manage to successfully lay our 6.4km cable at the Main Endeavour Field. The terrain is quite uneven and robust which unfortunately led to our cable being 200m short and so we could not connect the node. With some parts from shore, we determined we could repurpose a cable on ship and make the connection. 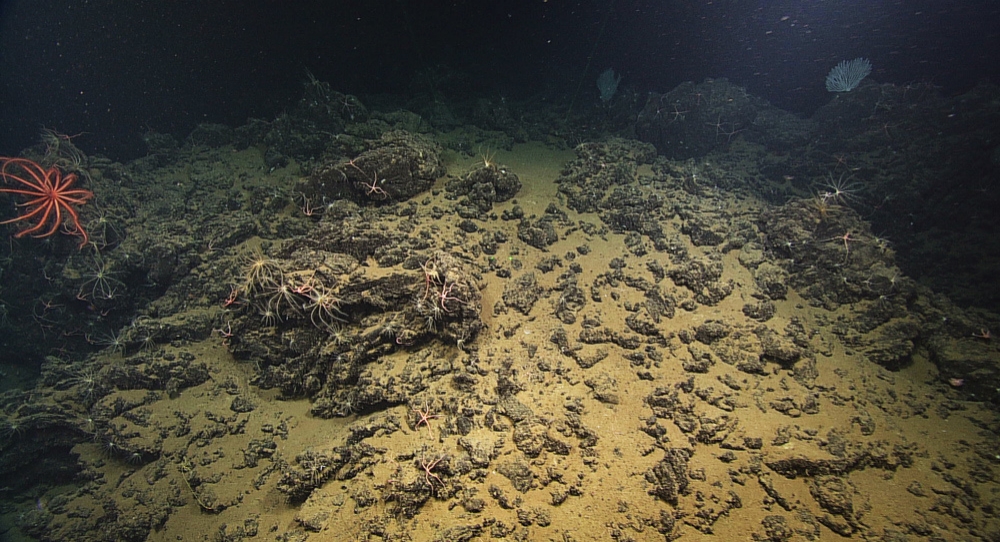 We completed our Mothra and Regional Circulation Mooring South surveys, and even managed to find landing spots for ROCLS, instrument platforms and the mooring, which is not an easy task with the terrain here! We then departed for ODP 1027, where we deployed an autonomous bottom pressure recorder.

At Barkley Canyon, we tested a heat probe array, fetched Barkley Benthic POD 3 along with its satellite current profiler and the sediment trap. Stormy weather forced us into Trevor Channel, where we took the opportunity to pick up additional parts and equipment needed to complete the Endeavour node to MEF cable connection.

At the Barkley Canyon hydrates outcrops we successfully deployed Wally II, but not without a scary 871m free fall (see our blog)! Wally was undamaged by his drop, turned his lights on and was left in Wally Land. A refurbished Barkley Benthic Pod 3 was deployed with a tripod camera, sediment trap, hi res Nortek current profiler, Kongsberg Rotary Sonar, and RDI 150khz ADCP. Unfortunately, a gale warning presaged rough seas that would hamper operations for many days.

After having a look at our weather maps we thought we might have a chance to lay the Mothra cable before the storm hit so we went directly to Endeavour without stopping at Cascadia Basin. Unfortunately, the storm beat us to the punch. We stayed put waiting for a weather window to deploy the Mothra cable, instrument platform and instruments. In the meantime, we worked on engineering an extension to connect the MEF cable to Endeavour node on board. The weather forecast was grim, and despite a brief break, the seas picked up with 8m waves preventing even CTD work.

At Endeavour, existing weather conditions and forecasts showed no hope for the next 24 hours, so we chose to transit to Cascadia Basin, where we successfully deployed two more autonomous bottom pressure recorders.

We returned to Endeavour waiting for a weather break. Winds had dropped to 8-10 knots, but the waves were still in the 6m range; we even noted a 9.3m wave! 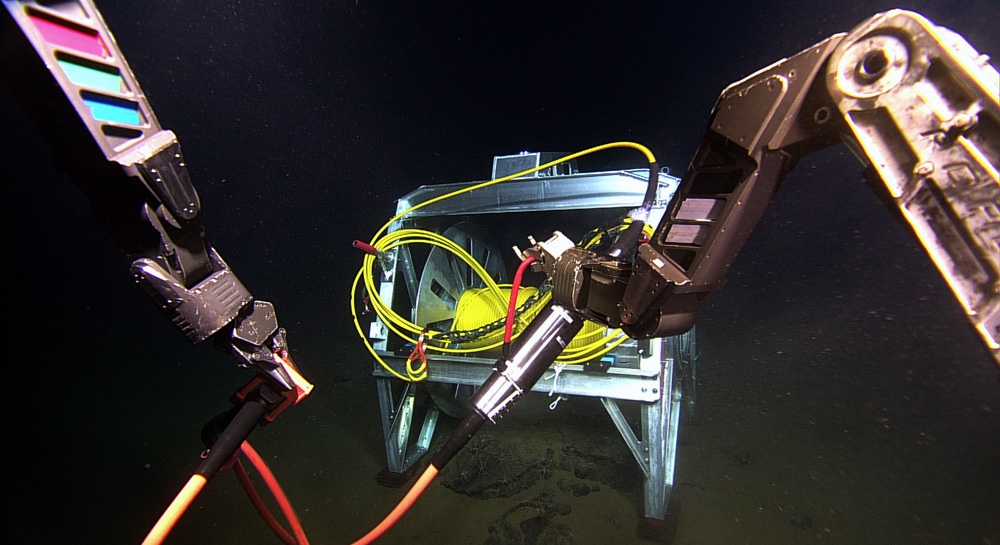 Fortunately, the winds died down significantly as did the seas so we were able to dive with ROCLS at 4:30 AM. With ROCLS safely on the bottom, ROPOS dove to lay cable, but developed an unfortunate issue with its manipulator arm. At the same time, winds picked up significantly, gusting to 35 knots with 5m waves, so we were forced to abort the dive.

Another weather break allowed us to dive, despite a problem with the ROPOS Launch and Recovery System (LARS), which was quickly and expertly repaired. We laid 250 m of cable and connected MEF to the node. To our great relief, all installed instruments at Main Endeavour vent Field (MEF) activated and began streaming data!

Unfortunately high winds and 10m waves kept us hovering above MEF waiting for a weather window to dive.

The weather calmed enough for us to complete our final dive of the expedition. We deployed a Benthic And Resistivity Sensor (BARS) and also Tempo-Mini on the Grotto vent complex, next to the Random Access water Sampler (RAS). Tempo-mini’s satellite iron, oxygen and temperature sensors were installed and adjusted and a 3D calibration survey was performed. Tempo-Mini’s camera was adjusted to monitor the tubeworm community. We took some water samples from the North Tower plume and inspected COVIS, the Cabled Observatory Vent Imaging System.

With this dive completed, we packed up and headed for home...