These crime solvers are real pigs*

When the M/V Oceanic Surveyor tied up at the dock in Steveston B.C., forensic anthropologist Lynne Bell was eagerly awaiting the tray of bones from pig carcasses #15 and #16, retrieved from Ocean Network Canada’s Strait of Georgia east observatory site.

This ONC custom-designed tray of blackened pig bones, retrieved from the Strait of Georgia East site, is destined for Dr. Bell’s lab at Simon Fraser University’s Centre for Forensic Research.

These remains were the latest retrieval in a nine-year series begun by Professor Gail Anderson, a forensic entomologist whose team examines the ways insect biology can be applied to criminal investigations.

“Work such as this has never been done before,” notes Dr. Anderson, “and without ONC, would not be possible, even today. No such similar underwater laboratories exist in the world and the ability to conduct this type of research is priceless.”

A wealth of ocean data leads to greater insights

Lynne Bell’s interest is ultimately in the skeletonized remains, but also in the process by which the pigs decompose in a marine environment. This includes marine chemistry, marine faunal activity, DNA survival and even the unexpected—in this case, the black bones that sometimes result.

“Frankly, this has been a dream project for me,” says Dr. Bell. “There are so many myths about the survival of human remains in the ocean. My favourite one is that bones just don’t survive. Anecdotally, I know this to be untrue. But this work has provided, albeit in the short term, measured evidence on pig bone, which is similar to human bone, and its survival in different marine contexts. So this project has been very important for my research on many levels.” 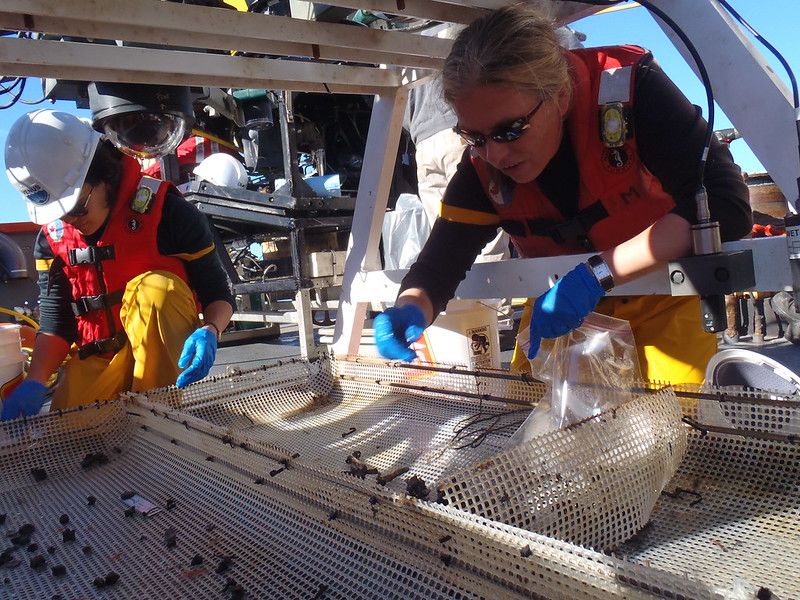 Collecting all the remaining bones from the experiment site is an important phase.(Left to right: Sarika Cullis-Suzuki and Dr. Lynne Bell) October 22, 2013.

After nine years, three locations and a major publication, this forensic team has archived a wealth of ONC observatory data demonstrating both depth, seasonal and time series differences.

“This gives us a clear insight into what would happen to a body in these, or similar, waters,” says Gail Anderson. “The research also provides recovery divers and families with realistic expectations as to what might be recovered after certain time periods.”

The Canadian Police Research Centre and the Centre for Security Science (Defence Research and Development Canada) have funded Anderson and Bell since 2012, and value their findings.

“Their work supports a major component of fatality investigations by police in adding a considerable depth of scientific evidence in fixing the time of death,” writes Sheldon Dickie, analyst with the Department of Defence. “Prior to this work, I am not aware of any body of science data-based documentation that could be referenced in court for the intended purpose.”

Drs. Anderson and Bell are eager to return to ONC’s observatories for another round of video observation and analysis, building upon previous results at 300 metres’ depth on the Strait of Georgia Central observatory site.

They also believe that experiments in deeper, less protected waters would extend and expand their research. Future plans may also include placing pigs #17 and #18 on ONC’s deep sea observatory off Vancouver Island.