What's the Deal with Flatfish?

An important part of climate change research is measuring and predicting the magnitude of ecosystem response. The northeast Pacific is a global hotspot for future oxygen loss driven by climate change. Overall oxygen content in the oceans will drop if sea surface temperatures continue to rise because warmer sea water holds less oxygen. If oxygen levels drop too low (hypoxia), animals will have to migrate, adapt or die – but how do you measure these thresholds for animal life?

Part of our ongoing ecological research on the impacts of oxygen loss on marine biodiversity is to determine low oxygen thresholds for animals living in hypoxic environments on Canada’s Pacific Coast. From years of surveying the life living around the Ocean Networks Canada instrumentation in Saanich Inlet, we have identified the slender sole (Lyopsetta exilis) as one of the key indicator species that drives assembly patterns for communities living in hypoxia. In order to measure hypoxia thresholds, we need to capture the fish with a trawl, keep them alive, and then measure physiological parameters such as metabolic rates and critical oxygen tensions under lab-controlled conditions.

A Benthic Transect Across Hypoxia from Jackson Chu on Vimeo.

Although our primary focus is on the community response to oxygen loss in the oceans, the slender sole is also a very unique species. Almost no research has been done on this flatfish — it's a small flatfish, not commercially important, yet super common in the Salish Sea and on the continental shelf from Alaska to California. The fascinating thing about slender sole is that it can live in almost zero oxygen and can tolerate hydrogen sulfide (H2S - toxic to most life), making it a complete oddball in the world of fish. You would never have known they were so adapted to extreme conditions unless you went looking for them using an ROV like Oceanic Explorer or Ocean Networks Canada underwater camera footage, and saw them burying themselves in H2S bacterial mats.

We hope to capture more of these fish in the near future, as we’ve already piqued the interest of several research groups who are curious to figure out more about their weird physiology. 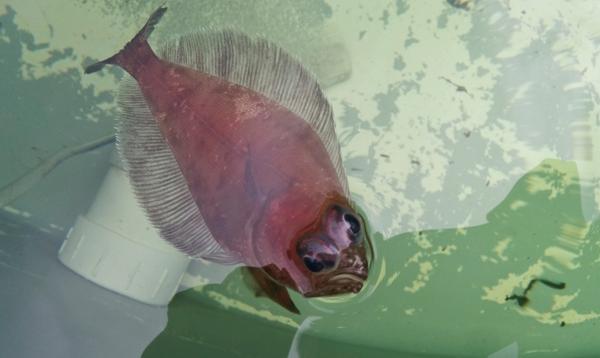 A slender sole (Lyopsetta exilis) captured from this week's trawl. 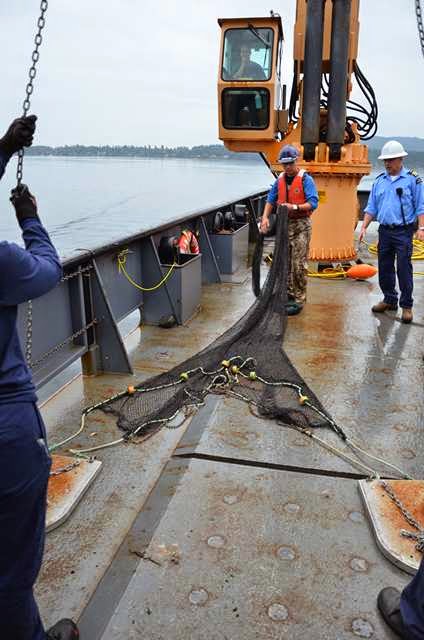 The small batch of fish from this week’s trawl is currently alive and happily living in the Aquatics Unit at the University of Victoria. This small cohort (n=39!) will be just enough to get our lab experiments started. When we match these lab-data to our field surveys, these measurements will tell us ‘how close to the edge’ animals can live under severe hypoxia. 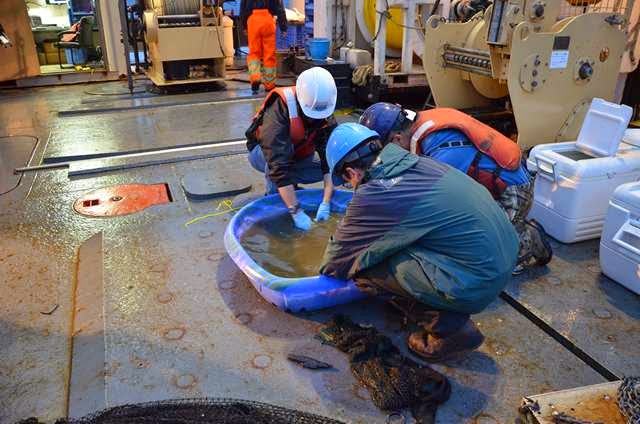 New research explains why Saanich Inlet is good for the climate
Jul 31, 2020
Saanich Inlet and the science of dead zones
Nov 28, 2016
The extent of habitat compression and hypoxia in Saanich Inlet from the 2016 hypoxia cycle
Oct 28, 2016
A Tenth Anniversary Inshore Maintenance Cruise
Jun 1, 2016
A decade of discovery in Saanich Inlet
Feb 28, 2016
3D Cameras in the Ocean
Sep 20, 2014
Maintaining the VENUS Observatory: March 2014 Expedition
Mar 7, 2014