On June 26, we completed our summer expedition, Wiring the Abyss 2012 aboard the R/V Thomas G. Thompson (University of Washington). Despite the inevitable challenges we encounter when deploying deep sea instruments, overall the cruise was a success. 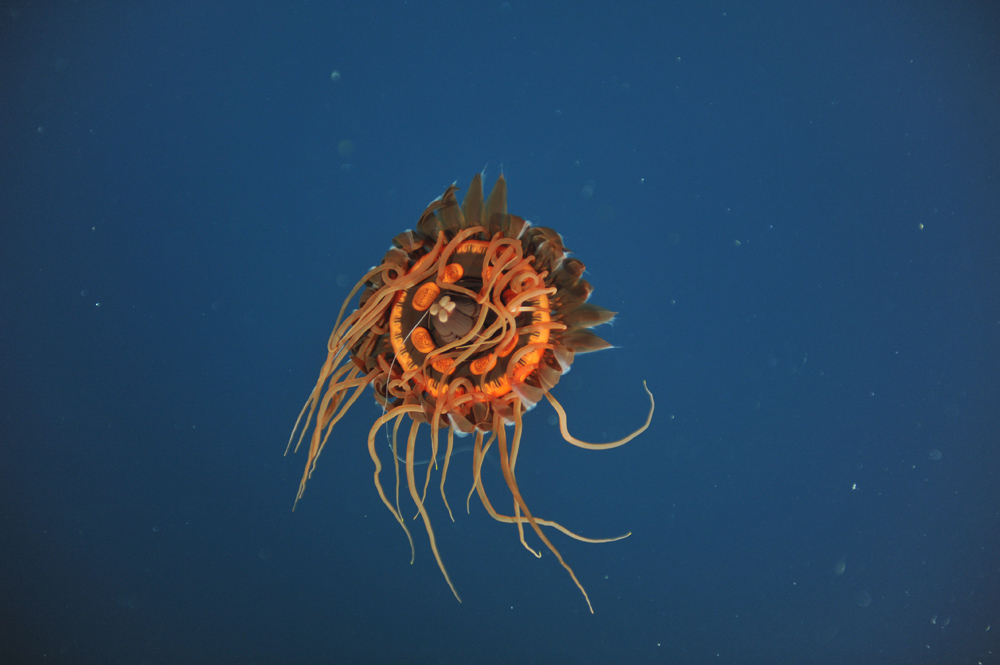 The Folger Deep instrument platform was retrieved, cleaned, serviced and tested on deck then redeployed. After the platform was reinstalled, we transited to Endeavour.

Weather delayed us for two days during our time at Endeavour, but we were still able to accomplish a lot.

A new instrument platform was successfully deployed to the Mothra hydrothermal vent field, where a short-period seismometer and a “BARS” vent effluent monitor will be deployed on an upcoming cruise.

The CCGS John P. Tully helped us deploy two new instrument arrays, the southeast and southwest regional circulation moorings, each holding 9-10 different instruments for measuring currents and water properties in the water column. Now all 4 moorings have been deployed; the northern pair was reconnected to Endeavour node and we plan to connect the southern pair during our September cruise.

A long day of careful preparations preceded deployment of the second cable for the new tsunami antenna and the cable lay took approximately 40 hours. In the meantime, some white-sided dolphins paid the ship a visit.

On a bright and sunshiny day, we watched excitedly as POGO (Profiling OceanoGraphic Observatory), the vertical profiler system, made its first successful profile all the way to the ocean surface.

Barkley Benthic Pod 4 was recovered for installation of a newly refurbished camera, which was successfully redeployed and is now working well. There were Conductivity Temperature Depth (CTD) casts being carried out to help calibrate POGO, the Vertical Profiler System (VPS), which also underwent testing. POGO's instrument float was brought right up to the surface for the first time. A small boat was put in the water to recordthis exciting and very successful trip. We also swapped out the Upper Slope BPR with a new one and then spent a little longer observing the POGO moving through the water column with ROPOS. After a busy and successful month at sea, the ship headed back to Esquimalt.

On our cruise for this leg was marine educator Goksenin Sen who successfully spoke with numerous school groups across Canada and even in the state of New York! To help illustrate how high the pressure is in the deep sea, Goksenin showed the classes a foam helmet and a styrofoam cup which had been sent to the seafloor with ROPOS. When they returned, they were less than half the original size due to the incredible pressure in the deep sea. With an excited vote from the students, Goksenin decorated a styrofoam cup for the students which was sent down again into the abyss and will be mailed to the school children.