Cast your mind back to 2006. A NASA probe went into orbit around Mars, Twitter was born and the iPhone was still just a twinkle in Steve Jobs’ eye.

It was also the year that Ocean Networks Canada (ONC), an initiative of the University of Victoria, made history by installing the world’s first interactive realtime portal into the ocean. This allowed scientists, policy-makers, educators and the public to “enter” the ocean from anywhere, at anytime, via the Internet.

On 8 February 2006, the world’s most advanced cabled seafloor observatory was successfully installed in Saanich Inlet near Victoria, British Columbia. It was just the start of a decade of exploration, innovation and expansion that continues today.

In celebration of this internationally significant milestone, here are the Top Ten Reasons to Celebrate ONC’s 10th Birthday.

Don’t just take our word for it. In 2011, ONC was named one of the '10 Most Ambitious Experiments in the Universe' by Popular Science. And why not? At the time it involved some 850 km of cable, 130 instruments and 400 sensors laid along the ocean floor to depths of up to 2.7 km, all of it connected to the Internet. It’s even bigger than that now. In 2012, ONC was named as one of Canada’s 4 large-scale research facilities, and the only one in the ocean, thanks to the Canadian Foundation for Innovation’s inaugural Major Science Initiative (MSI) Fund. ONC has made Canada a world leader on how to conduct high-tech research in corrosive salt water, bone-crushing pressure, extreme temperatures and perpetual darkness.

Think of it as a Fitbit for the ocean. Through its world-leading Oceans 2.0 data management software, ONC is continuously taking the ocean’s pulse and vital signs, including temperature, salinity, pH, tides, seismic activity and noise levels. We can’t see and hear what’s going on down there without this sophisticated system. Why does this matter? The ocean is the lifeblood of this planet. No healthy ocean, no healthy us. ONC provides scientists and leaders with the data they need to make informed decisions about coastal management, conservation, marine safety, climate change, and earthquake and tsunami detection. And speaking of that…

Where there’s smoke there’s fire, right? ONC and its partners are working on an ‘underwater smoke alarm’ that could save your life. This Web-enabled Awareness Research Network (WARN), now in development, will give us the vital seconds we need to shut down gas lines, stop trains and surgeries and duck under the nearest table. In 2009, ONC made history by installing the first offshore sensors where the restless Juan de Fuca and North American tectonic plates converge. These ultra-sensitive instruments monitor and measure the more subtle primary or P-waves that precede the dangerous secondary or S-waves that cause the damage. Now imagine this warning connected to an app. It’s all part of the grand plan.

As the saying goes, what can be measured can be improved. Climate change has been described as the biggest challenge of our time and a key to understanding it is the ocean. Thanks to ONC, we’re learning more and more about climate change and ocean conditions in the northeast Pacific every day – including a large patch of unusually warm water known as the Blob. In the Arctic, ONC’s Cambridge Bay Observatory is monitoring the accelerating decline of summer sea ice. And ONC is working with Fisheries and Oceans Canada and the Canadian Coast Guard to manage the country’s first Marine Protected Area at Endeavour Ridge, located over 200 km off the west coast of Vancouver Island.

(Top) A node pod from the VENUS observatory is lowered to the seafloor over the side of a ship. (Bottom) Wally the deep sea crawler at work at Barkley Canyon gas hydrate field, at a depth of 870m.

Like the space race, deep ocean exploration needs specially designed gear that you can’t buy straight off the shelf. And ocean tech is even more complex than space tech. ONC has worked with some of the most innovative minds on the planet to develop and build a remotely-operated, Internet-connected scientific research lab in deep sea ecosystems where dive suits just won’t cut it. That’s no mean feat! ONC partnered with Vancouver-based OceanWorks International to develop deep sea nodes and junction boxes that provide power and internet connectivity to the ocean floor, just like the wireless router in your home. And then there’s Wally, the Mars Rover’s underwater cousin. Specially developed as a deep sea crawler, Wally is a lovable telerobot, remotely operated by researchers in Germany to explore the ocean floor.

6. Window on an alien world.

The pinnacle of this vent chimney is inhabited by a community of tubeworms (ridgeia piscesae), thriving in 300°C-400°C, sulfide-rich fluid, depth 2154 m.

Underwater volcanoes that spew scalding black gases. Tubeworms that thrive, without light or oxygen, on sulphurous bacteria. A daily vertical migration of zooplankton so dense it can conceal a submarine from radar. Sea pigs that walk the ocean floor with hydraulically operated tube feet. It’s another world down there. ONC is helping us to understand and experience this new frontier, which is less mapped than the surface of Mars. The more we know about the deep ocean and the often bizarre creatures that have thrived there for millennia, the more it tells us about the origins of life on Earth and our collective future.

The Community Fishers app enables mariners to collect data used to assess the decline in Coho and Chinook salmon.

Want to explore the ocean floor and contribute to science? No diving gear required. Thanks to ONC, you can voyage to the bottom of the sea from the comfort of your own home. Digital Fishers is a crowdsourcing game that invites volunteers to observe hours of undersea video from their own computers. It pays off. Just ask Ukrainian teenager Kirill Dudko. In 2013, he spotted never-before-seen footage of an elephant seal gobbling a hagfish on the ocean floor. His YouTube video went viral. And in 2015, ONC teamed up with the Pacific Salmon Foundation to develop the Community Fishers app, which won The Economist’s People’s Choice ‘Ocean Innovation Challenge’ for ocean solutions that alleviate the tension between growth and sustainability.

A community of scavengers (including a sunflower star, squat lobster and shrimp) feast on a pig deployed as part of a marine forensics experiment.

Never mind TV’s CSI Miami and its various TV progeny. ONC has its very own crime scene investigations. In 2006, forensic entomologist Gail Anderson deposited a dead pig in front of ONC cameras on the bottom of Saanich Inlet. It was the first real-time scientific observation of what happens to a body in the marine environment, over time. Not great for the pig. But very helpful for Anderson’s ongoing homicide research. For example, this work helped to solve the mystery of the severed human feet that washed ashore on BC beaches between 2007 and 2011.

9. An ocean of collaboration.

The ONC Learning Team engage with communities and students throughout British Columbia.

It takes a global village to raise a scientific brainchild of this magnitude. Over the years, ONC has worked with hundreds of scientists, engineers, researchers, innovators, big thinkers, industry and government partners. It’s been a collaborative process of listening and responding to real needs while leading the scientific community into the 21st century. In the process, the ocean science community has cited ONC in 124 peer-reviewed journal articles, 392 conference papers and posters, 42 theses and 20 book chapters. And ONC’s learning and outreach team is getting students and communities across Canada hooked on the wonders of the ocean and the vital role it plays in our lives.

10. Coming soon to an ocean near you.

ONC’s Smart Ocean™ Systems is expanding into communities in British Columbia and the Arctic during 2016/17.

We’ve come a long way since Saanich Inlet, baby. In 10 years, ONC has evolved into a growing network of observatories in the Strait of Georgia, the northeast Pacific, the Arctic and the Bay of Fundy in the Atlantic. An additional six locations are slated for installation along the BC coast and in the Arctic over the next year, as part of ONC’s innovative Smart Ocean™ Systems. Through this state-of-the-art infrastructure, coastal communities will benefit from detailed information on weather, sea levels, fish stocks, marine life, incident response, climate change and storm surge. These community observatories are making science accessible to young and old, citizen and scientist. Can you imagine how much more we’ll know about the blue abyss ten years from now? The sky’s the limit!

Ocean Networks Canada is embarking on its second decade with a renewed mission to enhance life on Earth by providing knowledge and leadership that delivers solutions for science, society and industry. ONC is funded by the governments of Canada and British Columbia, as well as industry partners worldwide. 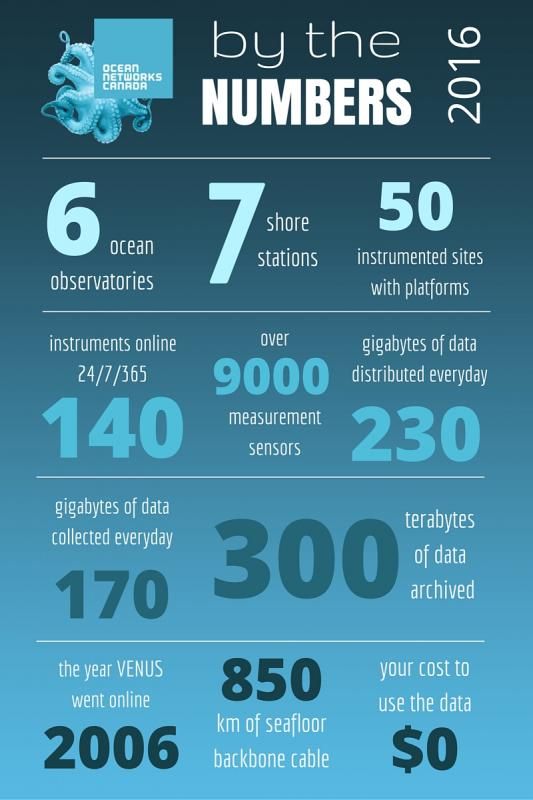