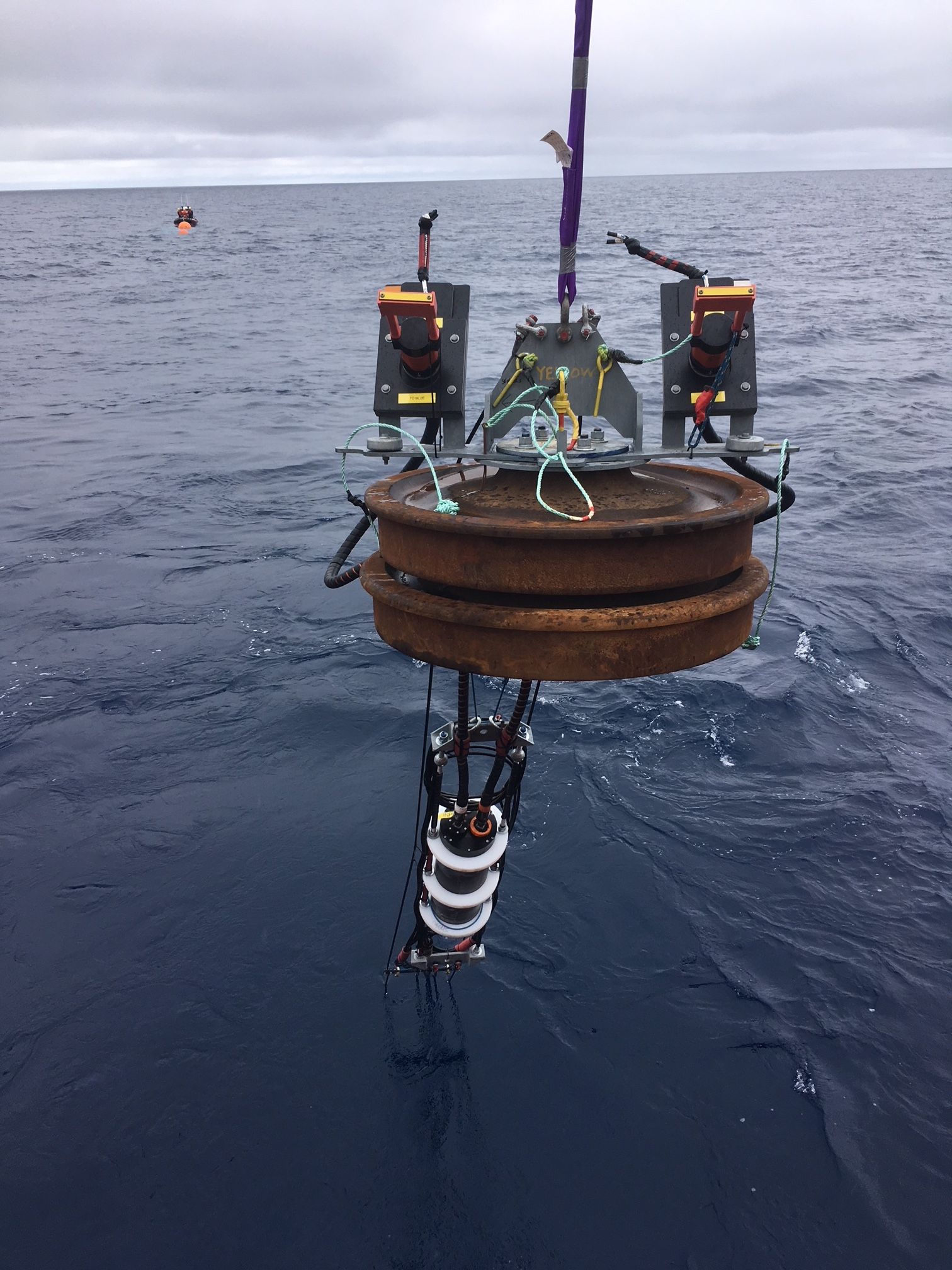 Ocean Networks Canada (ONC) is installing specialized equipment at its deepest site in the northeast Pacific Ocean to assess the location’s suitability for observing one of the universe’s most essential and difficult-to-study ingredients—neutrinos.

An initiative of the University of Victoria, ONC is deploying the equipment as part of Expedition 2018: Wiring the Abyss, its annual offshore expedition to install and improve cabled observatory infrastructure.

Neutrinos are one of the universe’s most essential ingredients and most abundant subatomic particles, produced by nuclear reactions from solar fusion, radioactive decay and exploding stars.

Increased knowledge about neutrinos could help answer some of the fundamental questions in astrophysics—such as those posed about the Big Bang and supernovae—and provide insight into the origin, evolution and fate of the universe.

Unlike charged particles and photons, neutrinos lack an electrical charge and can travel across the universe and through normal matter—including the centre of the Earth and human bodies—at nearly the speed of light without interference. This also makes cosmic neutrinos difficult to detect and study without large and very sensitive instruments.

ONC’s two specialized instrument arrays were installed during the first leg of the expedition in late June and will continue commissioning during the expedition’s second visit to the Cascadia Basin site in late July. The collection of detailed measurements over two years will assess the deep-sea site, approximately 200 km southeast of Vancouver Island, for future use.

The equipment being used to detect neutrinos is also sensitive to bioluminescence, providing scientists with data to study trends in this emission of light by marine animals—used to camouflage, attract, defend, warn, communicate, mimic and illuminate.

ONC’s 2018 expedition includes the installation of new instruments, sensors and cameras at its Endeavour site 300 km off Vancouver Island. The expansion will double the amount of instrumentation and improve the ability of scientists to continuously monitor and study the area’s hydrothermal vent systems and ridge-axis tectonic processes.

Hydrothermal vents at Endeavour are part of Canada’s first marine protected area, established in 2003. The vents host a biologically diverse and productive ecosystem that is home to globally unique and distinct native animal species. ONC has continuously monitored the Endeavour hot vents since 2009.

This year’s expedition will also install the last set of earthquake early warning sensors on ONC’s offshore observatory along the Cascadia subduction zone. ONC and Natural Resources Canada have been simultaneously installing land-based seismic and GPS sensors on Vancouver Island. Once completed, ONC’s comprehensive earthquake early warning system will be tested and delivered to Emergency Management BC by March 2019. The BC government has invested $5 million to help develop the existing system.

Ocean Networks Canada (ONC), an initiative of the University of Victoria, monitors the west and east coasts of Canada and the Arctic to continuously deliver data in real-time for scientific research that helps communities, governments and industry make informed decisions about our future. Using cabled observatories, remote control systems and interactive sensors, and big data management, ONC enables evidence-based decision-making on ocean management, marine safety and environmental protection. ONC also works in collaboration with educators, students, communities and Indigenous peoples on ocean monitoring initiatives along BC’s coast and in the Arctic.

Neutrinos are one of the universe’s most essential ingredients and one of nature’s most abundant subatomic particles, produced by nuclear reactions from solar fusion, radioactive decay and exploding stars. Travelling through normal matter—including the centre of the Earth and human bodies—at nearly the speed of light, non-interacting “ghost particle” neutrinos with no electrical charge are difficult to study and detection requires large and very sensitive instruments.

In partnership with the Technical University of Munich and the University of Alberta, ONC installed two 120-metre-long instrument moorings, or “strings,” located 50 metres apart on June 24 from the CCGS Tully during the first leg of Expedition 2018: Wiring the Abyss.

Between the two moorings, three photon-emitting and five photon-detecting optical modules will assess the transparency and darkness of seawater at Cascadia Basin over a two-year period. These photomultipliers produce and receive short-lived bursts of light that simulate the detection of neutrino interactions with other particles in the water column.

“The Cascadia Basin site provides access to a vast, mostly flat area with potential for infrastructure expansion that would be unhindered by natural obstacles or existing equipment,” says Benoit Pirenne, ONC’s executive director of user engagement. “The site also has the right water depth and is only moderately affected by bottom currents.”

ONC is scheduled to return to the project site on July 23-24 as part of the instruments’ commissioning phase. Once completed, data from the sensors will be available for free online in real-time via ONC’s Oceans 2.0 data management and archiving system.

ONC’s existing observatory infrastructure at Cascadia Basin, together with know-how, reliability and experience in deploying and maintaining deep-sea sensors, could help scientists better understand neutrinos and address some of the fundamental questions in astrophysics—such as those posed about the Big Bang and supernovae—and provide insight into the origin, evolution and fate of the universe.

“Neutrino detection is presently challenged by the complexity of deep-sea marine operations,” says Technical University of Munich physics professor Elisa Resconi, one of the project’s two principal investigators. “What makes ONC attractive for us is the combination of the organization’s expertise in deep-sea marine operations and the already-instrumented Cascadia Basin site; deep, dark and quiet—ideal conditions for a neutrino observatory.”

Other neutrino observatories are located around the globe—underwater in the ocean and deep lakes, underground in abandoned mines or tunnels beneath mountains, and encased in Antarctic ice—to isolate detection from cosmic rays and other background radiation. Neutrinos were originally hypothesized in the early 1930s, and first detected by experiment in the mid-1950s.

“The field of neutrino astronomy benefits significantly from having a detector network distributed around the globe, providing enhanced sensitivity and correlated measurements,” says University of Alberta associate physics professor Darren Grant, the project’s other principle investigator. “A deep-sea deployment in the Pacific does not yet currently exist, and a detector array at Cascadia Basin would complement the other large-scale arrays currently operating and in development.”