Sophisticated technology is making it easier to gather data that informs our understanding of the changing ocean and its relationship to our well-being. But the ocean knows no borders. Ocean Networks Canada seeks to expand the bridge that links Canadian and United States ocean intelligence across borders, to create synergies of knowledge and discoveries that inform local, national and international perspectives.

On 11 December 2018, Ocean Networks Canada and the University of Victoria hosted a talk and reception at the Embassy of Canada in Washington, DC. Ocean science leaders from Fisheries and Oceans Canada, the National Oceanic and Atmospheric Administration, the Ocean Observing Initiative, Esri and ONC discussed big data delivery for climate solutions, cross-border sharing of ocean and climate data, and defining approaches for sustained partnerships. 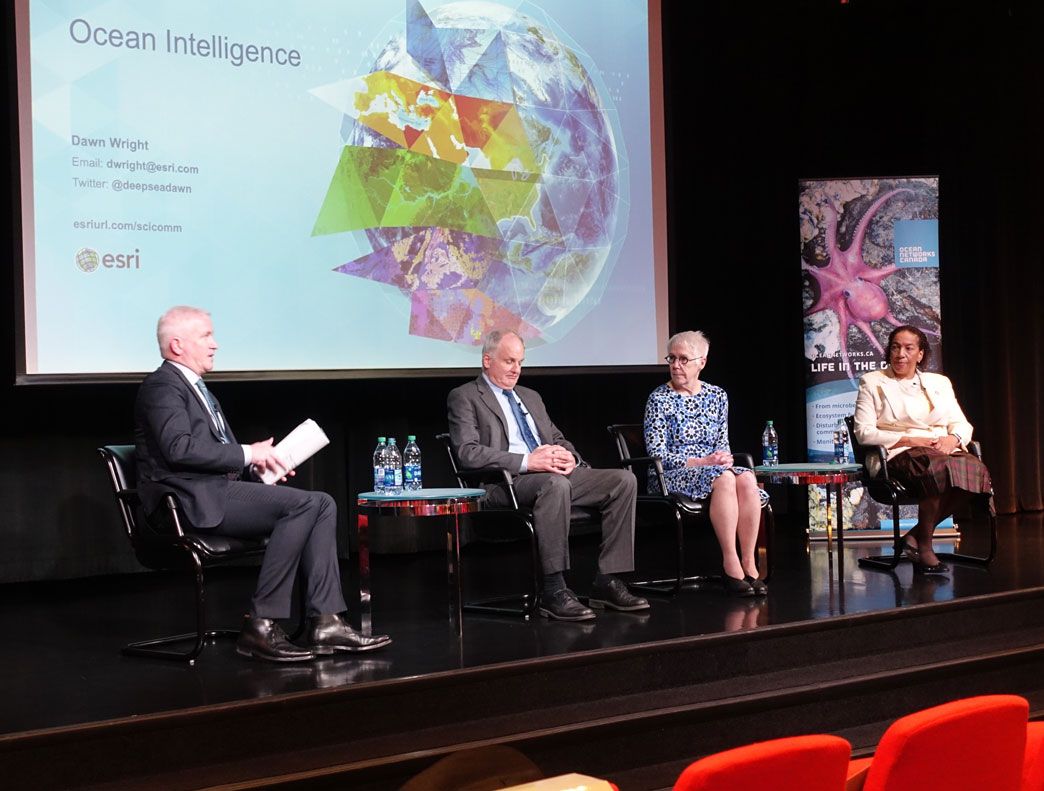 The event focused on sharing perspectives about how Canada and the US can continue to work together on ocean science, especially in an era of rapidly changing oceans due to climate change, plastic pollution and illegal, unreported and unregulated fishing.

“I was proud to showcase one of Canada Foundation for Innovation’s Major Science Initiatives to an international audience at our beautiful Canadian Embassy in Washington, DC. The Canada Foundation for Innovation’s support enables Ocean Networks Canada to leverage this world-leading ocean observing infrastructure for ocean intelligence to better understand the pivotal role of the ocean at this critical time.” Kate Moran, CEO & President of Ocean Networks Canada

Review tweets of the event

As a nation with three ocean coasts, Canada depends on healthy marine ecosystems. Our oceans create good jobs, and are an important habitat for our vast, abundant wildlife. Increased collaboration between Canada and the US on oceans science will benefit citizens on both sides of the border.

Yesterday, the Parliamentary Secretary to the Minister of Fisheries, Oceans and the Canadian Coast Guard, Sean Casey, welcomed guests to an event hosted by Ocean Networks Canada. The event focused on sharing perspectives about how Canada and the US can continue to work together on oceans science, especially in an era of rapidly changing oceans due to climate change, plastic pollution and illegal, unreported and unregulated fishing.

Further, the Parliamentary Secretary met with key stakeholders such as the Ocean Networks Canada, Stimson Center, PEW Charitable Trust and Oceana to discuss Canada’s investments related to ocean governance, Global Ghost Gear Initiative and combatting Illegal, Unreported and Unregulated fishing. In addition, Parliamentary Secretary Casey met with Admiral Timothy Gallaudet, the acting administrator of NOAA, and had a productive conversation about the ongoing collaboration between Canada and the United States in many areas including the ongoing work to protect and restore the Southern Resident Killer Whale population in Pacific waters.

“We continue to come together to have these important conversations on protecting marine species, like Southern Resident Killer Whales, that cross our transboundary waters. We are united in working to address the challenges facing our oceans and supporting the science that will increase our understanding of the ocean at such a pivotal time.” Sean Casey, Parliamentary Secretary to the Honourable Jonathan Wilkinson, Minister of Fisheries, Oceans and the Canadian Coast Guard

“Our biggest challenges in ocean health cannot be resolved by one country or partner alone. These important scientific discussions help us better understand how ocean ecosystems work, how they are affected by human activities and how we can minimize our impacts on Canada’s marine spaces and species.” The Honourable Jonathan Wilkinson, Minister of Fisheries, Oceans and the Canadian Coast Guard