On Wednesday October 14 at 10 a.m., in coordination with the Great BC Shakeout event, the University of Victoria’s Ocean Networks Canada is teaming up with U Vic Electrical Engineering students to illustrate how ONC’s earthquake notification technology and a student-designed alarm system can provide vital seconds to help people make important decisions, before the shaking starts. 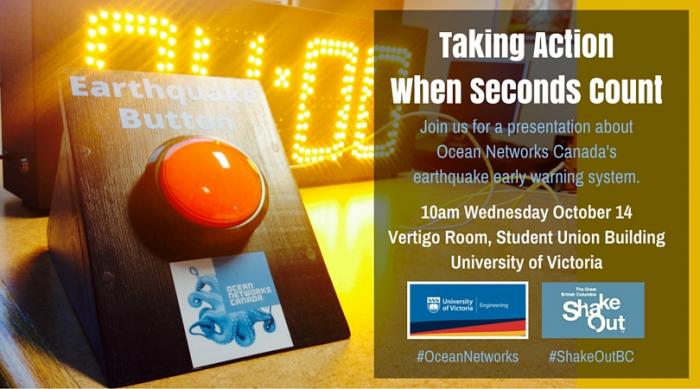 Using a big countdown timer and video, the demonstration will take a magnitude 9 megathrust scenario—the Big One—and explain how ONC offshore sensors can detect the first signs of an earthquake and send out notifications that allow critical actions to take place that can save lives and automatically mitigate damage.

“ONC is the only organization in Canada that has earthquake sensors offshore,” says Adrian Round, ONC’s director of observatory operations and a director of U Vic’s Emergency Operations Centre. “With just a few seconds of warning, automatic systems can slow trains, shut down gas lines, halt surgeries and keep fire hall bay doors open. And people of all ages can find a safe place to drop, cover and hold on until the shaking stops.”

UVic’s vice-president Finance and Operations, Gayle Gorrill and Oak Bay fire chief and president of BC Earthquake Alliance, Dave Cockle are joining the demonstration at Vertigo in the Student Union Building, to help ramp up awareness of ShakeOut, the worldwide earthquake drill held every year in October.

Local emergency preparedness teams from U Vic, Victoria, Oak Bay, Saanich, and ShakeOut BC will also be on hand to share with students how they can best prepare themselves and respond quickly when the Big One strikes.

ONC's Web-enabled Awareness Research Network (WARN), developed in 2014, is a research software platform that coordinates information detected from ONC sensors and calculates key parameters such as earthquake epicentre, magnitude and time to ground-shaking. The technology receives data from seismic instruments and delivers a notification, in this case, to the earthquake alarm developed by UVic electrical engineering students, based on a sample earthquake scenario.

“ONC provides the sensor data to help make decisions, when seconds count,” adds Round. “But effective earthquake early warning requires a huge collaborative effort, involving governments, science, industry, and the will of the public.”